A few months ago, Tania Rincon and Cristian Nigel, hosts of the show, “Lo Mejor de FoxSports (The Best of Fox Sports)”, asked me: How does anyone or how do you train to swim in cold water? My response during the show, was quick: cold showers every day and a one hour bath in cold water and ice once a week! However, as I think and reconsider my answer,  I realize that the training is much more complex than my response; sometimes it can even be painful.

My fist encounter with 13 degrees Celsius water was one November morning, in which, to celebrate my birthday; a friend of mine invited me to swim at a lake close to her neighborhood in Toluca. “To start your cold water training come swim at the lake near my house, it is always cold, only the bravest dogs dare to take a dive…” she said. And so, I did, thinking it would be easy, one morning I decided that I was going to do my first cold water training, and celebrate my birthday at the same time. And just as the bravest dogs did, I took a dive and… A horrible pain paralyzed me!!! At that very moment I thought I had beaten my head with a stone, I started feeling dizzy, everything around me seemed to be spinning, I could not breath, and I could not move my arms. I freaked out!! From the shore my companions asked if I was all right but I could not answer, I could not talk and all of my body started cramping and hurting. I had not given a single stroke yet, I was just there trying to stay afloat and breathe so that air could get into my lungs. I did not understand what was going on… I felt so bad!! I still felt dizzy, but I tried to take a deep breath, and started taking strokes to thwart the pain the cold water was inflicting. I was not even cold, I was in pain!! I took the first strokes with my head out of the water to see where I was heading… When I submerged my face, I felt thousands of stings in my face, because of the cold water. Staying calm, even when I felt someone had putted me in a fridge, I kept on swimming. Little by little the pain reduced and I was able to keep my head underwater. My hands and feet went numb, and turned purple, I had turned purple completely! When I reached the other side of the lake, I saw a gardener working on the shore, he had not seen me; I tried to talk to him, and just said… “Good morning”, he had never been more scared in his life, as he realized the voice came from someone inside the water, he never expected it! I went back to the other side and with the help of Julie and Juan Pablo I came out of the water. I had lost sensitivity at the moment, started shaking uncontrollably, they helped me get dry, to put on some warm clothes, and to hold a thermal bottle with hot tea, until, little by little the shakes gave in and I was able to warm myself with the Van’s heating system.

That day, I was very disappointed thinking how could I plan to swim a cold water long distance event, if I had not been able to hold in the water even for one hour? The disappointment and the deceit forced me to investigate and study this topic, this is how the long journey of cold water swimming training started in order to achieve, many years later, the Triple Crown of Open Water Swimming.

I was very disappointed by my first encounter with 13 degrees water, but at the same time it helped me to dedicate myself to this matter. I started to take cold showers, in the begging with warm water and little by little turning the water colder until one day I just opened the cold water without touching the hot water handle. My body started to get used to the cold sensation. As a reward, I used to grant myself the chance to take a hot shower once a week… It ended up being a warm shower since the hot one had a burning effect and made me sleepy afterwards. I did not go back to the brave dogs’ lake until March, because on December, January and February my friend told me the water was below 10 degrees Celsius. Way too cold!

In the middle of March I went back to the lake and without that much pain and with much more confidence I was able to swim for an hour! A great step ahead!

In April, my coach, Rodolfo Aznar, who helped me train during that time, suggested to go to the Volcano Nevado de Toluca… At first I did not understand what for… then he explained there were two lagoons, in what had been a crater, I was so scared I turned green!! To swim in one of the lagoons at Nevado de Toluca at 4,000 meters high and with water below 10 degrees Celsius seemed crazy!

It was obvious; I had to go ahead with this madness! The whole idea was to experience a cold water shock. I mean that my body felt what cold really is so that it could stop complaining for being under water between 15 and 18 degrees. Understanding the theory was very easy… the practical exercise was not that simple! In the middle of April, on spring, the day we chose to go up to the Nevado de Toluca Volcano, turned out to be cloudy and as we went up the road it started raining sleet… I thought the swim would be canceled but I was wrong!

I remember standing at the lagoon’s shore wearing a bathing suit and my red sandals, there were some people at the place asking me to smile to get a picture… Obviously they could not believe I was getting in the water!! I smiled for the picture and nearly froze me, started walking to get in the water … uff it certainly was a cold shock!! The water was 7 degrees Celsius! All of my body ached and after two or three minutes I stopped feeling it. As if I was sedated, I started swimming but did not submerged my head into the water, it was too cold, after a while I encouraged myself to submerge my head into the water and took it out quickly, even my teeth hurt! My coach asked if I was alright but I could not talk… but managed to smile.

The idea of this training was to avoid risks, but we wanted to experiment the cold shock, and this is the way it was for me. Fifteen minutes later I went out of the water, and with some help I got dry and wore warm clothes. This time, the shakes lasted almost an hour, but after a little while I recovered the heat. It was even better when on our way back, we stopped at a “quesadilla” stand and I ate some, which were delicious!! I did this training with my Sport City Mexico swimming relay team, training to prepare ourselves for a four way crossing to the English Channel; which we accomplished in August 2007.  I think everyone remembers the cold water shock but mostly the “quesadillas”! 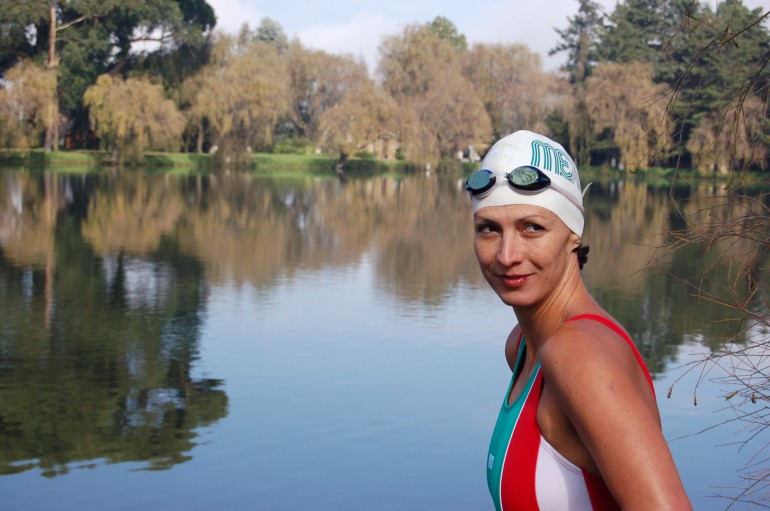 Sunday, August 6th, 2017 There are moments in life when words are not enough to express what the heart feels … Today is one…

They say you have to face and overcome many monsters in order to swim the Kaiwi Channel… A Dream Come True! We have been…

“I alone cannot change the world, but I can cast a stone across the waters to create many ripples.”- Mother Theresa I will be that…